Vancouver, British Columbia – May 20, 2021 – Dixie Gold Inc. (TSX VENTURE: DG)(“Dixie Gold” or the “Corporation”) is pleased to provide an exploration update on its Red Lake Project in Ontario. The Corporation’s Red Lake Project is situated adjacent to the Dixie Project being advanced by neighbouring Great Bear Resources Ltd.

“We are excited to share both our airborne geophysical results with shareholders and recent follow-on interpretive findings. The geophysical exploration program has greatly increased our understanding of the Red Lake Project, including sufficient data to re-classify large portions of the project area as likely being of mafic and felsic composition, which significantly enhances its prospectivity when compared to what now appears to be a historic mischaracterization of its underlying rock assemblages. In addition, follow-up geophysical interpretation work has outlined an important high-strain zone that we believe could be a prospective gold exploration corridor, particularly as that zone also contains previously disclosed SGH gold-in-soil anomalies within its boundaries,” commented Ryan Kalt, CEO of Dixie Gold.

The expansive-spatial area covered by Dixie Gold’s Red Lake Project, which exceeds 25,000 ha, is in large part covered by overburden that limits outcropping. This lack of outcropping resulted in limited historic exploration levels which in the view of the Corporation has left available a significant opportunity for Dixie Gold to apply modern-day exploration technologies and techniques to assess the area’s potential more thoroughly for gold mineralization, particularly given exploration success in the area by neighbouring Great Bear Resources Ltd.

Geological maps for Dixie Gold’s Red Lake Project area have now been created by combining airborne geophysical data with known surrounding basement geology.  Main rock types are believed to be intrusive, metamorphosed intrusive, mafic volcanic and felsic volcanic assemblages. The interpretation of significant volcanic and felsic rock suites within Dixie Gold’s project area is important as historic regional work appears to have incorrectly identified large portions of underlying rock assemblages as granite-based, a mischaracterization that appears to no longer be supported based on the recent geophysical survey results and subsequent interpretative work.

The largest interpreted area of volcanic rock is contained within the central and eastern portion of the Red Lake Project, and structural interpretation has defined a west-northwest trend of dense faulting that is viewed as constituting a high-strain zone.  Such zones are conducive to fluid migration that can in turn facilitate gold mineralisation. 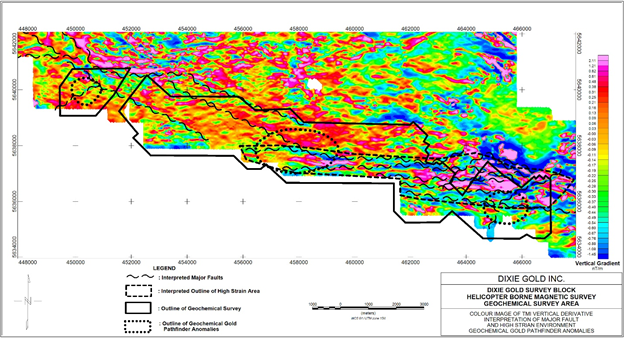 The Corporation cautions that past results or discoveries on adjacent projects (i.e. Great Bear Resources Dixie Project) may not necessarily be indicative as to the presence of mineralization on the Corporation's project (i.e. Dixie Gold’s Red Lake Project).

Dixie Gold Inc. (TSXV:DG) is a publicly-traded exploration company involved in a diverse portfolio of high-impact exploration projects in Canada.

The Company has 25,737,188 common shares issued, with no warrants outstanding.