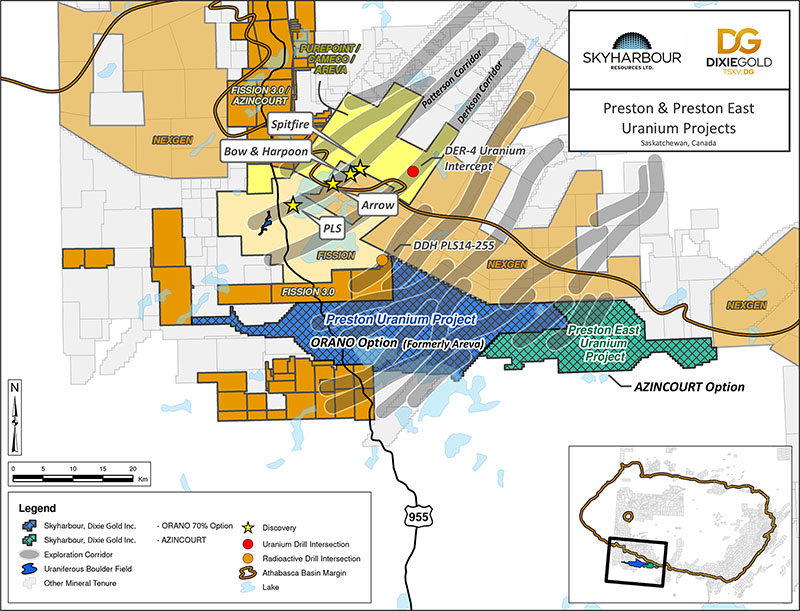 The Athabasca Basin in northern Saskatchewan is host to the world’s richest uranium deposits. The two dozen or so known uranium deposits in the basin have grades averaging more than 3% U308 and those in production provide for upwards of 20% of the global supply of uranium.

In early 2013, Dixie Gold Inc. (then Athabasca Nuclear Corp.) announced the first-mover acquisition of a district-scale land position for uranium exploration along the southwestern margin of the Athabasca Basin, a historically under-explored area. This resulted in a leading mineral tenure position in the Western Athabasca Basin collectively referred to as the Preston Uranium Project, located near the Patterson Lake South (PLS) high-grade uranium discovery made by Fission Uranium Corp. (subsequently named the Triple R deposit) and the Arrow uranium discovery made by NexGen Energy Ltd. in early-2014. These discoveries, along with other known deposits in the broader area, are establishing the Western Athabasca Basin as a tier-one uranium discovery camp.

The discovery of shallow, high-grade uranium deposition at PLS resulted in intensive tenure acquisition and exploration efforts in our area of focus. Modern technology and new approaches to modelling uranium deposition outside the traditional basin boundaries are leading to considerable discovery success in the area. Like our regional exploration peers, Dixie Gold Inc. is applying modern exploration science to the Western Athabasca Basin, which historically received much less exploration focus than the prolific Eastern Athabasca. 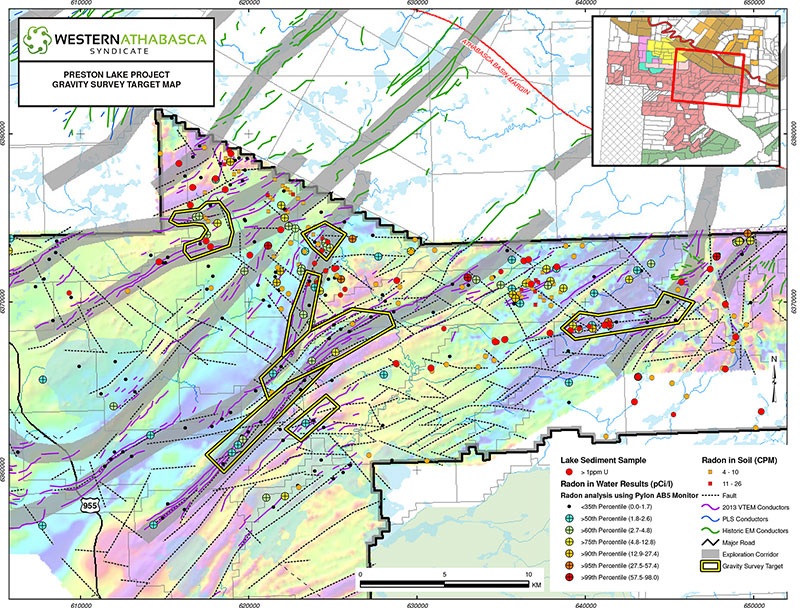 Based on exploration work to-date, our Preston Uranium Project hosts several key features considered by geologists to be important indicators for uranium deposits. These are major structural faults hosting graphitic conductors along with in-situ mineralization and lake sediments that contain anomalous uranium values.

Uranium mineralization in the area, including at Triple R and Arrow, has a number of similarities to the high-grade uranium deposits in the eastern part of the Athabasca Basin like those at the Cigar Lake and McArthur River mines. The mineralization occurs in structurally disrupted and strongly clay altered, commonly graphitic pelites and metapelites with narrow felsic segregations / pegmatites. Intervals of quartz-feldspar gneiss and semipelite are also present. Sulphides are commonly associated with the mineralization along with anomalous levels of cobalt, nickel, molybdenum and boron. Uranium mineralization in the Patterson Lake area is also associated with fesic intrusives, primarily pegmatites. The Western Athabasca Syndicate has both target types on its main project area in the Patterson Lake region.

The claims are underlain by Phanerozoic rocks (limestone and sandstone) similar to the PLS discovery area. At the PLS high-grade discovery it is interpreted that the uranium has been mobilized along the fault zones and has been concentrated in the sandstone under the limestone.

A combined 4840 line kilometre VTEM plus time domain survey on the Preston Uranium Project has been completed. The VTEM plus system has been used successfully to locate basement conductors similar to the structures that host the high-grade uranium discoveries at the nearby PLS project. An additional 4400 line kilometres of tight spaced airborne radiometric survey has been flown to locate uranium boulder trains and in-situ uranium mineralization. Using the initial data, a sophisticated targeting matrix has identified and prioritized areas for both additional field and drilling follow-up. Field work has included ground-truthing of high-priority geophysical targets using water and soil radon sampling, biogeochemistry, geochemical lake sediment and soil sampling, prospecting, and scintillometer surveying. The Western Athabasca Syndicate has employed a similar exploration methodology that ultimately led to the high-grade Triple R and Arrow deposits nearby.

A review of historic data collected has identified a significant uranium-in-lake sediment anomaly in the western part of the Preston Lake West block. A sample collected by the Geological Survey of Canada returned a value of 5.4 ppm U3O8, considered to be significant in an area with a background uranium value of 1 ppm. This high U3O8 value may indicate either the down-ice glacial transport of uranium boulders from source or an in-situ source of uranium. For comparison, the highest value down-ice from the PLS discovery is 3.2 ppm U3O8.

Past results or discoveries on proximate land (e.g. Fission Uranium, NexGen Energy) are not necessarily indicative of the results that may be achieved on the Western Athabasca Syndicate Project.