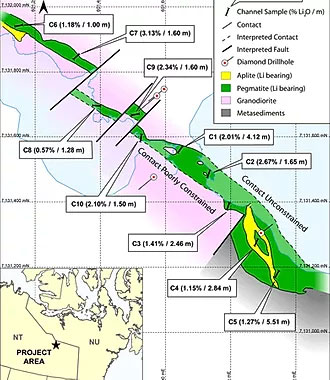 About the Phoenix Lithium Project

The Phoenix Lithium Project is located in Canada’s Northwest Territories, approximately 70km southeast of the Diavik Diamond Mine and less than 60 km from existing winter road infrastructure.

The significant lithium grades and widths returned from limited past drilling of the Big Bird and Curlew lithium pegmatites (both acquired by way of a transaction in 2016 with North Arrow Minerals Inc.) highlights the potential for the Phoenix Lithium Project to host a number of lithium rich spodumene pegmatites.

The Phoenix Lithium Project was further subject of a conceptual exploration target by third-party consultants to the Corporation in 2018, additional disclosure of which may be found in the Corporation’s news release dated January 25, 2018 (see: https://www.dixiegold.ca/clean-commodities-corp.-announces-completion-of-modelling-at-phoenix-lithium-project).

In addition, in late 2017, significant portions of the Phoenix Lithium Project were independently surveyed and taken to lease with the Crown, the effect of which being that such area was granted a 21-year lease (subject to annual rent payments), with further renewal right thereafter.

The Corporation cautions that no resource estimate has been defined at either the Big Bird or Curlew lithium pegmatites.